GAELIC football positions have evolved massively over the years.

The days of 15 players taking to the field and matching up with their opposing 15 for the entire game are long gone. Thirty years ago, if a corner back wandered up to the corner forward position he’d have got the curly finger and pulled straight off.

In the modern game, it’s now a prerequisite for corner backs to try and cover every blade of grass on the pitch.

Before we start, check out the graphic below for a quick refresh on the 15 positions on a Gaelic football team. 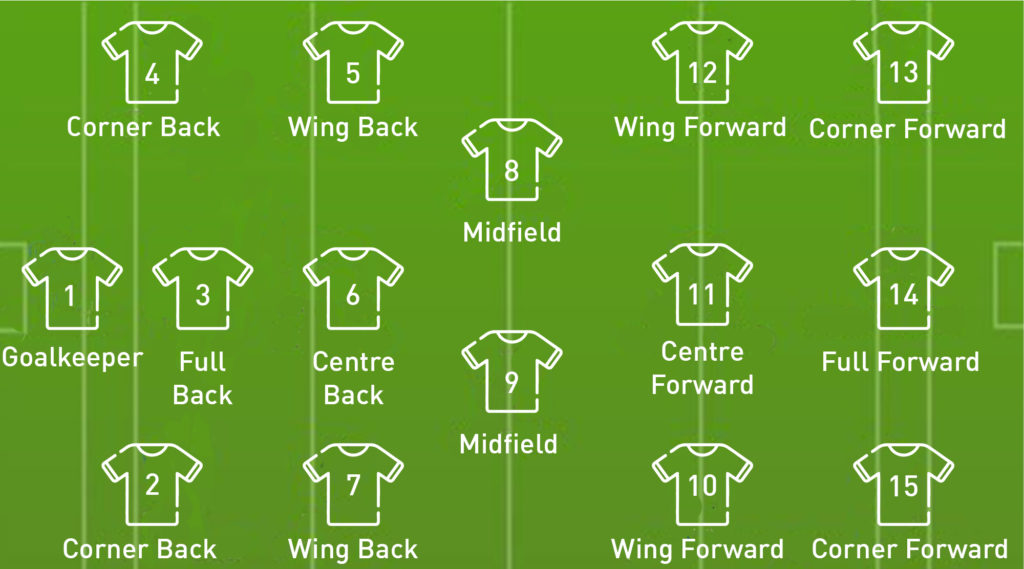 Now that we know the modern day Gaelic football positions, lets get into what skills are required to play them and the players who are making them their own at the top level.

If not, and you want more GAA content, our Best National League moments is available to read right HERE.

In a different era, the goalkeeper was a much simpler role.

You stood in goal and tried to stop goal-bound shots, while every kickout you had went long down the middle to the midfielders.

However, that manual has been torn up and republished, mainly thanks to Dublin GAA legend Stephen Cluxton. 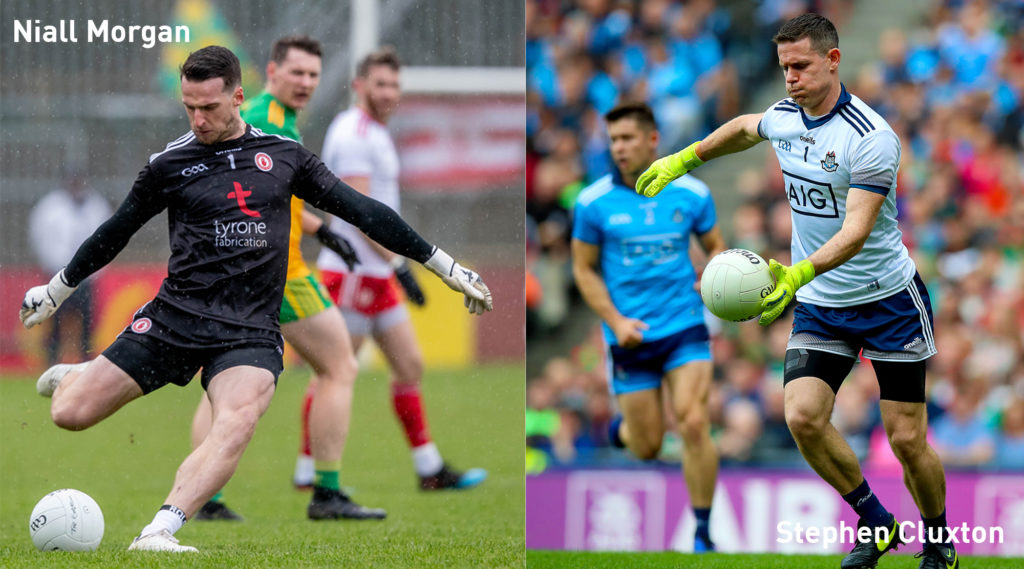 After establishing himself as Dublin’s number one in 2001, Cluxton perfected the art of the short kickout and quick restart, with an ability to land the ball on a sixpence to his teammates.

But that’s not all.

Cluxton can also be a place kicker and score points (remember the 2011 All-Ireland Final?), has incredible reflexes which makes him a top-class shot stopper, is comfortable on the ball to take it out the field to create an overlap, as well as being a brilliant communicator to organise his team.

These days you have goalies like Monaghan’s Rory Beggan, Tyrone’s Niall Morgan and Donegal’s Shaun Patten who have all those aforementioned qualities and can basically play as an extra outfielder.
So really, a goalkeeper is an all-round style player.

The number one objective for any corner back is to mark the opposition team’s most threatening scorer.

A modern day corner back needs quick feet to keep with the usually fast-paced corner forward, upper body strength to be able to hold up the forward and dispossess the ball in the tackle, and discipline to avoid coughing up soft frees.

But of course, they’re now also expected to attack from the back and make long, lung-bursting runs up the field, breaking the opposition defensive line and chipping in on the scoreboard or setting up scores. 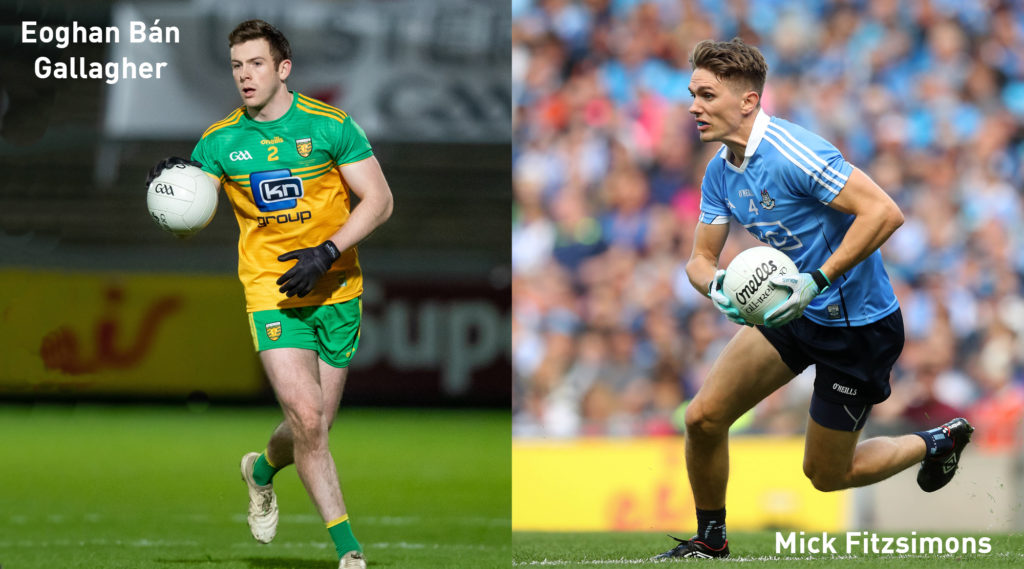 Donegal’s Eoghan Bán Gallagher and Galway’s Liam Silke are your typical attack-minded corner backs who regularly contribute to the scoreboard, while Dublin’s Mick Fitzsimons and Mayo’s Lee Keegan are renowned for their man-marking ability.

Their main job was to protect the goal, snuff out attacks and be a big physical presence. They were never too bothered about galloping up the field to support the play. Cavan’s Pádraig Faulker is cut from the same cloth.

But depending on the team’s style of football, full backs are often expected to attack from deep. Young Footballer of the Year and Mayo’s Oísin Mullin, as well as Dublin’s Davy Byrne, are those type of all-action full backs who love to get up the field and don’t possess the same physical size as a Neil McGee for example. 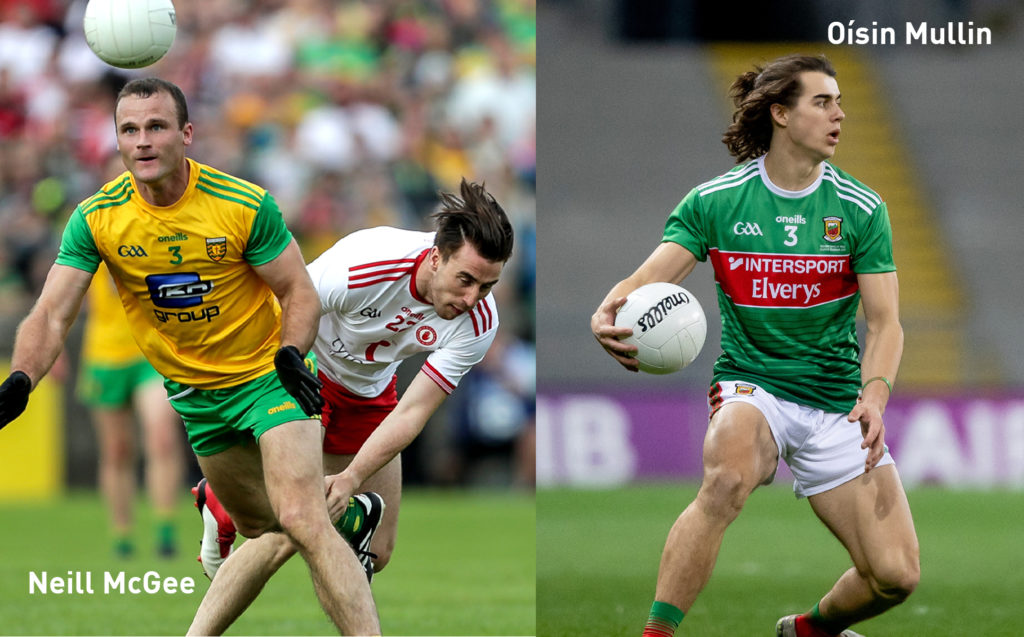 First of all, a high base of aerobic stamina is needed for this role. Inter-county wing backs can cover more than 10km during a game and nearly 2000m in sprint distances.

Wing backs needed to be versatile players who have pace to break lines and start attacks, good footballers to play those 40/50+ yard passes into the forwards, aggressive and disciplined to be winning breaking ball and making tackles, while an eye for the posts also helps. 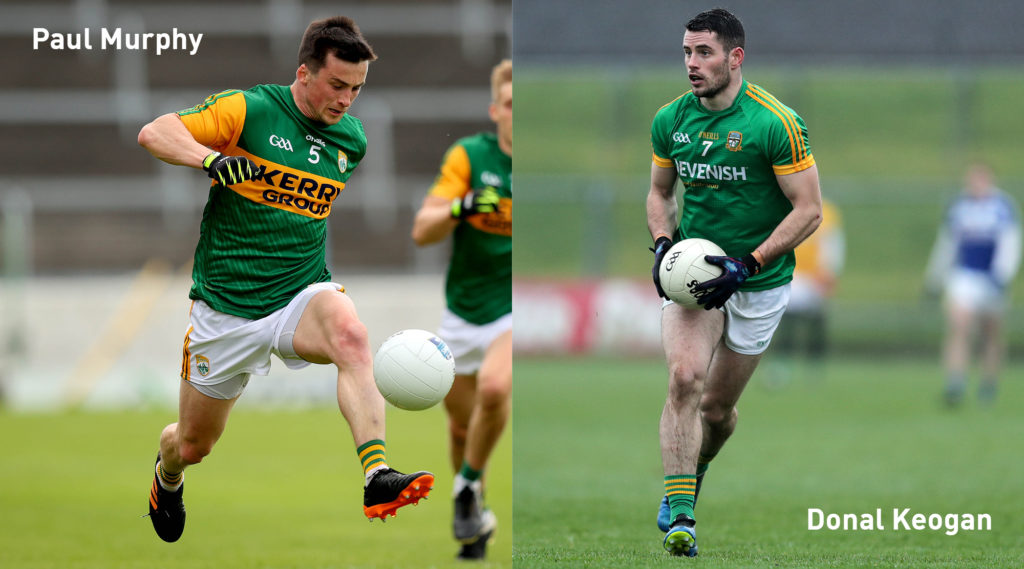 The centre back is clamp that holds the back line together. They’ll need all the skills of the wing back, but have to be more disciplined about sitting and holding the middle channel.

It can be the enforcer type role and the player needs to have a high football IQ to sniff out attacks before they come to fruition, while a touch of abrasiveness also helps.

Arguably, the importance of the old-school centre back has evolved to being more of a free role in the modern game, but guys like John Small of Dublin, Colm Boyle of Mayo, Derry’s Gareth McKinless and Peter Harte of Tyrone all have the traditional centre back style about them. 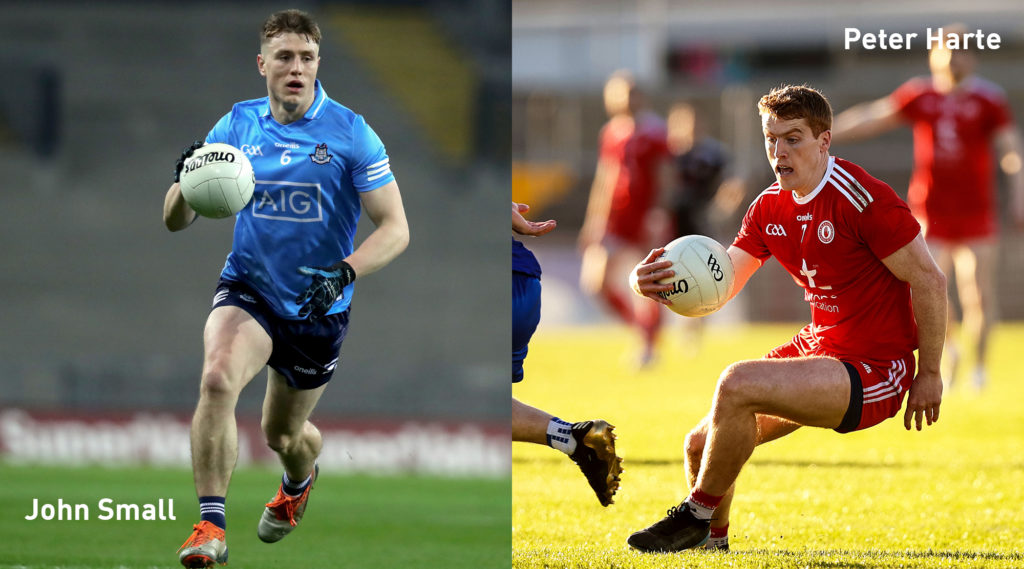 The engine room of the team – Midfielders are one of the most vital cogs in the wheel in terms of Gaelic football positions.

It wouldn’t be unusual to see them cover close to 12km in a single game, so they need to have incredible stamina. Plus, they’ll be required to win kickouts, link ball from defence to attack, defend and to get scores.

Dublin’s Brian Fenton is quite possibly one of the best midfielders to ever play the game, while his teammate James McCarthy isn’t too far off. Kildare’s Kevin Feely and Kerry’s David Moran are also complete footballers.

Those aforementioned guys are tall, athletic and powerful men. 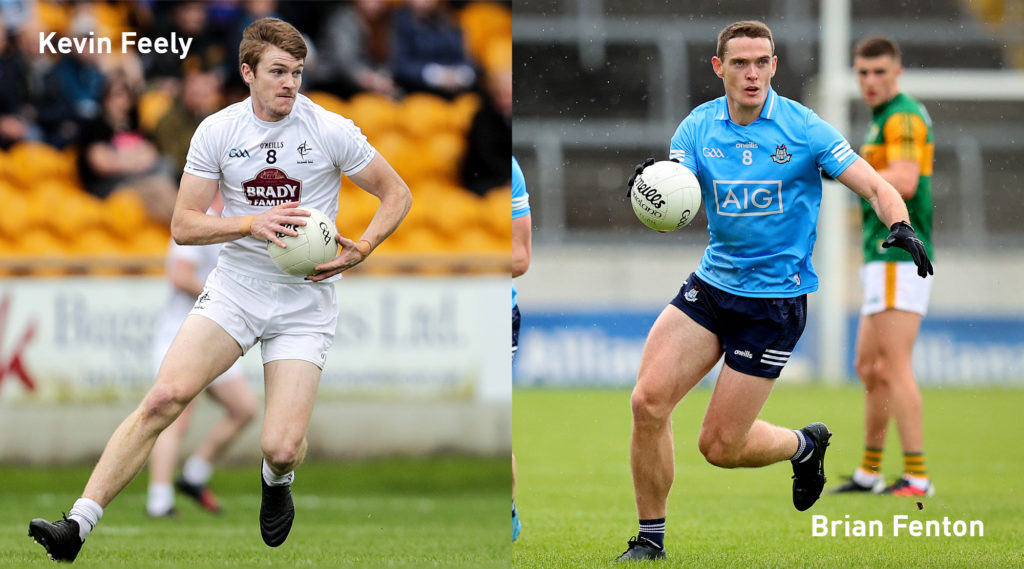 Arguably the toughest position to play on the pitch due to the work rate required.

A wing forward is expected to do the defensive work of a wing back, but the attacking work of a midfielder and corner forward. Often they’ll find themselves covering ground and not getting on much ball, so patience is required to play the position well.

They need to be able to anticipate the breaking ball on kickouts, provide width on the attack and deliver high-quality passes to the inside line. 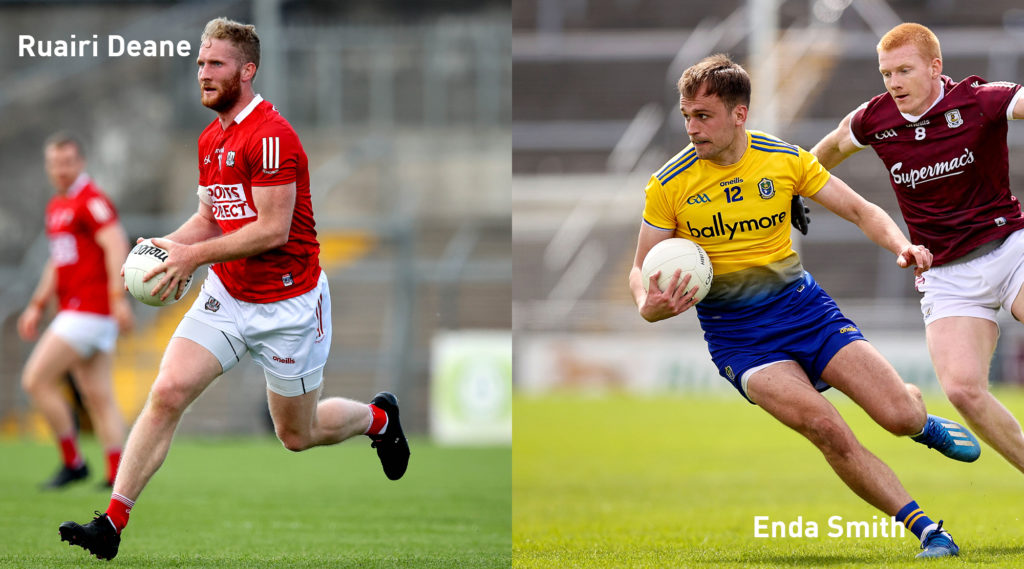 The artist of the team – usually highly skilled, boasts a big engine and a natural born leader.

A centre forward needs vision, ability to scrap for breaking ball, can tackle, score and play pinpoint passes into the full forward line.

Often the most complete footballer on the team.

Kerry’s Seán O’Shea and Dublin’s Ciarán Kilkenny are the country’s best. Aidan O’Shea has enjoyed time their for Mayo, while Galway’s Shane Walsh can be unstoppable on his day. All those guys are supreme athletes, genius footballers and possess the ‘X Factor’. 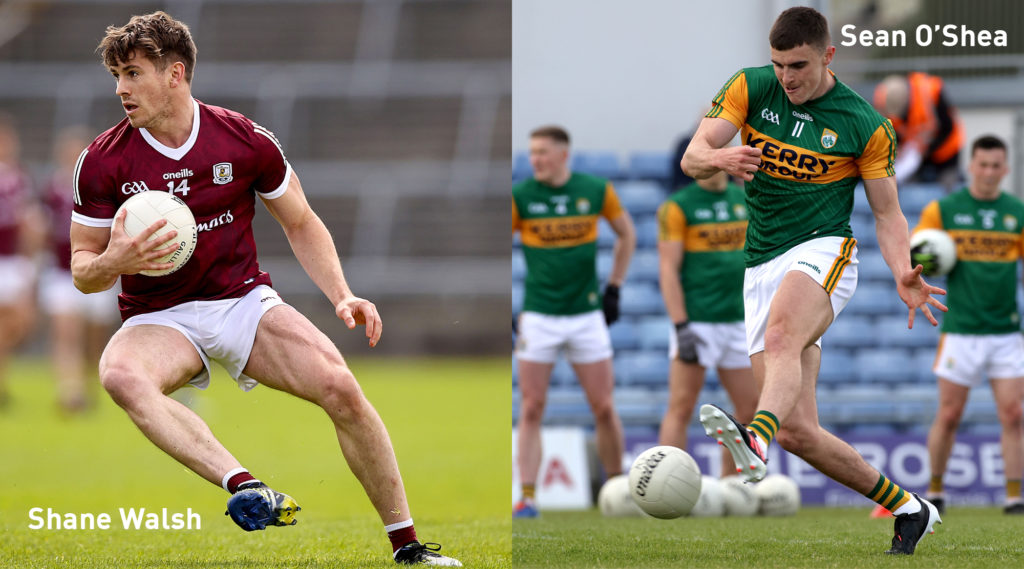 Their main job is to put scores on the board, so an eye for the posts is the single most important factor for a good corner forward.

Most likely, they’ll also be the free taker – a massively responsible role that requires skill and concentration in abundance.

Pace and quick feet are a huge advantage in creating space and keeping away from the claws of a corner back, while good hands ensure an ability to win ball out in front.

Patience is another important attribute because often times the full forward line can be starved of ball, so being able to stay calm and make use of limited possession is crucial.

Some of the best include Cillian O’Connor, Dean Rock, Paddy McBrearty and Michael Murphy of Donegal, Conor McManus of Monaghan and the great David Clifford from Kerry to name a few. 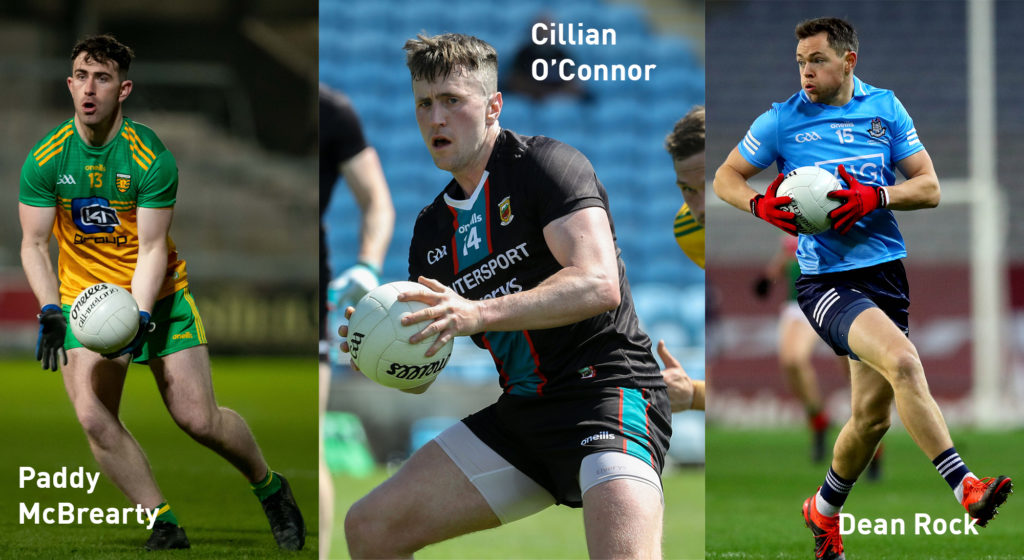 We hope this guide will help you find your best position on a Gaelic football team. And if you think we’ve left any player out who deserves a mention – no doubt we have – then let us know in the comments.

Otherwise, get out there and get practicing!