Hayley Coleman is one of the most sought after make-up artists in the country and will this year be running the VHI WMM for the first time. Elverysblog.com has been following her progress as she gears up the run on Monday June 6th. 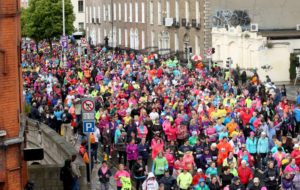 Hayley has been hard at work getting herself race ready over the last number of months but she did meet a bit of bother recently as injury threatened to sideline her from the race. However, as she explains, she eased the pain with rest and recuperation.

“For the last two weeks I was carrying an injury in my lower back and it held me back a small bit so I have been doing smaller amounts. I’ve just been trying to keep myself ticking over without injuring myself further. I took a few days off because it got to a stage where it was very sore but the last week it improved and I was able to get back doing small amounts, just making sure I am ready for the race.

I’m feeling great now though and hopefully I’ll be able to do it in an ok time. The last week was just about getting myself as ready as I can before I run so it’s been good.”

The beautiful weather the country has experienced recently was a world away from the rainy conditions of when Hayley and thousands of others set out on their preparation for the Vhi Women’s Mini Marathon 2016 and that presents its own difficulties she said – albeit nicer ones!

“It’s quiet hard running in the heat – you have to make sure you’re well hydrated. I find anyway I can get dehydrated quickly but I make sure to take plenty of water on board before. It is nice though to run when it’s dry without wind and rain battering your face!”

“I normally don’t run with a water bottle anyway, I make sure I’m hydrated before my runs and on Monday there will be water stations along the way as well if I’m feeling like I need to get some water on board.”

It’s been a long road since Hayley started out but she admits that the fun element of the race has allowed her to work her training around her life and work.

“I was away last weekend so that threw my training a bit, but it allowed me not to start focusing too much on the race either. At the end of the day it’s not a competition, and you don’t want to start worrying about it. I’ve been as good as I can but I have allowed myself a few treats – you have to enjoy it all as well. I won’t go out over the weekend though , that would completely ruin me,” she laughed, before adding, “but I’ll be as good as I can and get as much rest as possible.”

Already looking ahead to this evening and her recovery after the event Hayley sung the praises of her foam roller once again – and advised her fellow runners to get their hands on one if they can. She also emphasised the importance of a proper warm-up ahead of today’s race.

“The foam roller I’m living on at the moment! With my back and glutes I need to use that before and after training. Sometimes I wasn’t warming up enough so that’s something that I’ll certainly make sure I do before the race is warm-up properly! It’s one thing I’d say to everyone doing the race, don’t start without a warm-up, it could be the difference between you finishing today or not. But certainly the foam roller has really helped. It’s great and it’s something I know I’ll be using on Monday night!!”

Elverys Intersport wishes everyone taking part in today’s Vhi Women’s Mini Marathon all the very best of luck on this wonderful occasion!

6 Top Tips on How to Run Injury Free