With just a few Cup finals, and the major European finals to come, the curtain fell on another scintillating season of soccer across the continent in the major leagues.

Barca were crowned champions again thanks to Luis Suarez and his hat-trick while the title had already been wrapped up by Bayern Munich, Juventus, PSG and of course, Leicester well in advance of the final weekend.

One of the most interesting asides to the final games was the roll-out of the 2016/17 jerseys by some of the clubs and there really are some crackers next season!

The Italian five in a row champions debuted their latest home jersey from adidas as they accepted the trophy on Saturday and it is as cool as you’d expect. A move away from the multiple stripes of the 2015/16 jersey, this still has the iconic black and white and incorporates the three stripes of adidas as well. Top work from the current masters of Italy.

AC have a chance to end the season with silverware but must defeat Juve in the Coppa Italia final next Saturday night to do so. They’ll do so in their new jersey which is unmistakably Milan but with a twist on the design as the fade on the lower half of the jersey gives way to their famous stripes.

Second place in the Bundesliga was the fate of Dortmund this season but they re-established themselves as a major force once again with some of the most exhilarating football in Europe at times this campaign. Next year should be interesting for them and they will do so in a very cool Puma designed effort. The round neck collar and slim fit make it stand out as much as the famous yellow and black.

After announcing they are ending their deal with adidas prematurely last week, Chelsea stepped out in what will now be their last adidas designed kit. The v-neck collar and side stripes make it a very classy sign off, harking back to a more vintage design. 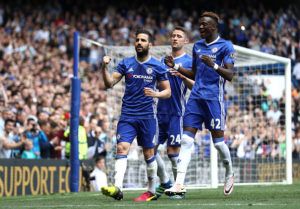 Finally for now, the champions of Germany Bayern Munich celebrated yet another triumph in their outrageously cool new home jersey. As with the other new adidas kits this features the three stripes detail underarm but also a collar which sets this one apart. It really is a beauty.

Check Elverys.ie and your local Elverys Intersport store for the new jerseys and training ranges from the top names in European club football today! http://bit.ly/1YYMQB1