THE 2016 DUBLIN JERSEY – AN EVOLUTION IN STYLE

We don’t have access to any figures yet, but we’d be fairly confident in saying that Dublin top the county jersey sales charts – the combination of population and success sees to that.

Capitalising (pardon the pun) on this, not since 1998 have the Dubs had a shirt which has lasted for more than two years and twice in that time, 2009 and ’13, have jerseys lasted for just a year due to sponsor changes.

Unsurprisingly, given the marquee status of the county, O’Neills have almost always given Dublin something different. Year zero for GAA shirt ‘design’ is 1991, when extra lines were added to counties’ sleeves. Dublin did share that with a lot of other counties, but the jersey introduced in 1994 was something out of the ordinary and, while it would be copied by Clare, that wasn’t until 1998, when the Dubs had moved on.

Since then, pretty much every other strip worn by the Metropolitans has been in a style not utilised anywhere else – even the pedestrian-looking 2010 offering had unique shadow-striping. A very similar look featured on the just-departed 2014-15 kit, but that may have had something to do with the suddenness of AIG’s replacing Vodafone as sponsors and, in any case, the shade of blue – close, if not identical, to AIG’s – was a new departure.

Dublin created a lot of hype around the launch of the latest kit, and we must say we loved touches like the acknowledgment of what has gone before with the #drawnfromhistory hashtag. 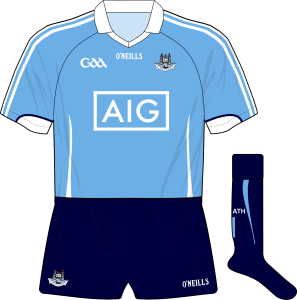 While the flashes on the sleeves are the same as those featured on a lot of new O’Neills jerseys this year – Cork, Galway and Down sport them – the uniqueness comes from the collar, in two senses: most counties have been going for what O’Neills call the ‘Mandarin neck’ (basically a crew neck with an insert) of late, and secondly it’s a totally new style of collar, with the ‘v’ being shallower than seen before.

It’s the colour configuration which has drawn the most comment, though – white has usurped navy as the secondary hue on the jersey, harking back to before the 1970s, when sky blue and white were the county colours. It’s a fairly fresh look – if a bit Manchester City!

The shorts are the usual navy while the socks are also that colour (they have alternated between navy and sky blue in the past while), and white is only used for text. If the retro look was the idea, then white shorts and sky blue socks would have been a logical, if radical, approach (see pic 2). 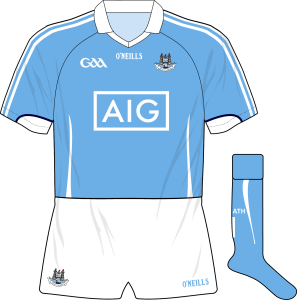 Alternatively, they could have kept the usual look, with navy more prominent than white on the jersey (pic 3), but this would have been too safe, tried and trusted. If they were set on white for the collar and stripes on the jersey, then perhaps the best compromise would have been extending the Jack and Meg White (White Stripes, get it?) look onto the shorts and socks (pic 4)? 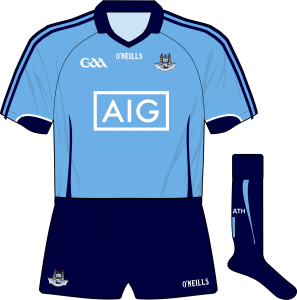 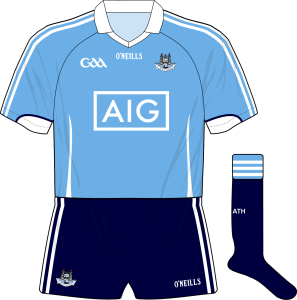 t’s certainly different and new, as we would expect from the Dubs, but certainly one that has caught the eye already this summer!

Get the 2016 Dublin jersey at Elverys Intersport now in store or online! http://bit.ly/1SQIiYd