Since it was first founded in 1847 Elverys Sports has witnessed some of the most dramatic events in Irish history, and none more so than the 1916 Easter Rising, the centenary of which will be celebrated this weekend. Indeed, the Elverys Sports store on what was then Sackville Street in Dublin was caught up in a small way in the momentous happenings of that seismic period in the history of the country.

Cricket, once widely played across the country was in decline since the GAA had introduced Rule 27 – known ever since as “The Ban” – was still a popular enough in Dublin to have Elverys stock bats and accessories in the window of the store.

The location of the store so close to the main fighting going on at the GPO, meant Elverys were in the middle of the cross-fire and general destruction of the main street. 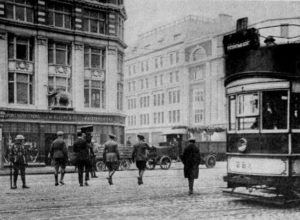 There was widespread looting on the street from the night of Monday the 24th and the Sinn Féin 1916 Rebellion Handbook, published by the Irish Times in 1917, describes children roaming the streets with sweets, toys and ‘hockey and golf sticks and all kinds of articles used in popular pastimes’, which would certainly suggest Elverys was a victim.

The Cricket Bat that Died for Ireland, a wonderful blog on Irish history, explains further what happened in those tumultuous days.

“The bullet lodged in the wood of the bat is a .303 calibre, which was used by the British Army for both their standard issue Short Magazine Lee Enfield rifles and also Lewis machine guns.  The Irish Volunteers had about 900 1871 model Mausers, landed at Howth two years before, which used .45 calibre ammunition, so the bat was shot by a British gun. Rifle fire on Sackville Street was heaviest on the Tuesday of the Rising, before the fires began to spread on the Wednesday, so it’s possible, though not certain, that the bat was shot on that day.”

“Perhaps one of the reasons the cricket bat has captured so many people’s imaginations is the idea of such a symbol of ‘Britishness’ taking a bullet in the rebellion. Maybe the fact that the bullet came from a British weapon adds to the irony.”

Today, in close proximity to where the original Elverys store stood, the name proudly lives on in Dublin city centre in Arnotts where three great Irish companies – Arnotts, established in 1843, O’Neills, founded just two years after the Rising, and Elverys, have come together to commemorate that fateful week as can be seen below. The 1916 Jersey can be purchased in any of the nearly sixty Elverys stores the length and breadth of the Republic which the men and women of the Rising fought to bring about.

To celebrate our heritage, Elverys is giving 19.16% off all online purchases from Friday until Easter Monday at midnight. Check out Elverys.ie for full details.

THIS OFFER HAS ENDED.

Thanks to Mark Jenkins and Breda Malone for their assistance with photography and information for this article.