Elverys Intersport, one of Ireland’s leading sports retailers with 58 stores nationwide, is to be the new title sponsor and official retail partner of Connacht Rugby. The new three-year deal will re-establish Elverys’ relationship with Connacht Rugby dating back to 2005.

Connacht of course had their most successful season ever in 2015/16 winning the GUINNESS PRO12 its first trophy in their proud 131 year history! That success was rewarded with a record seven Connacht players featuring on Ireland’s recent tour to South Africa.

Elverys, established in 1847, is Ireland’s oldest sports store, and today has 58 stores countrywide. Currently the company employ almost 800 people in Ireland. In 1995, Elverys became part of the Intersport group, one of Europe’s largest sporting goods buying groups. The Elverys brand remains true to its original roots, stocking products for a wide diversity of sports.

The new Connacht range for the upcoming season will feature the Elverys Intersport branding and will be launched in late July.

Speaking about the sponsorship Elverys Intersport Chief Executive Patrick Rowland highlighted that the opportunity to re-establish a relationship with Connacht was a perfect fit for Elverys:

‘’We believe that this is a great opportunity given our roots in the West of Ireland to launch a partnership with a local organisation who also have a significant national and international presence. Connacht Rugby mirror our ambition to be the best and most successful brand in each of our respective sectors. 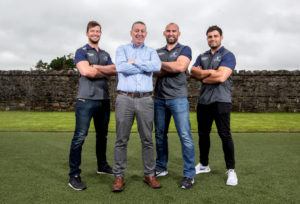 Buying & Marketing Director of Elverys Intersport, Loman Caulfield (above) commented on the brand’s commitment to rugby in Connacht:

“Down through the years we have been involved with Connacht Rugby at all levels of the game throughout the province, having previously sponsored the professional team, the Connacht Schools Cup, the Connacht junior team, as well as a number of All Ireland League clubs. Our heart is in Connacht and this is well reflected in our backing of Connacht Rugby.”

In welcoming Elverys Intersport to the Connacht Rugby family Willie Ruane, CEO of the club said:

“Everyone at Connacht Rugby is delighted to welcome Elverys Intersport as our title sponsor and official retail partner in what is a very exciting time for the entire province. We believe Elverys Intersport share our strong commitment to our community and we look forward to working together and representing the real ambition and belief that is so very clearly part of Connacht as a people and a place.”